I am a travel photographer and writer. My stock files include high quality landscape and travel images from North America and Europe. The main specialties are: outdoor recreation, four-wheel driving, hiking and backpacking photography and mountain and desert landscape photography.

Specific areas in North America comprise the Colorado Plateau, the Rocky Mountains of Colorado and Canada, Mojave and Sonoran Deserts, California's Sierra Nevada, and Chihuahua Desert and the mountains of West Texas. My files include a very extensive coverage of Mexico's Baja California, Yucatan Peninsula and the historic cities of Mexico's Highlands. In Europe, I have photographed repeatedly the Swiss Alps and the Dolomites of Italy. Other European subjects include extensive coverage of Poland, Czech Republic, Slovakia, Spain, Italy's Sicily, Croatia, Slovenia, Montenegro and the Baltic Republics. For a comprehensive list go to the LIST OF SUBJECTS. 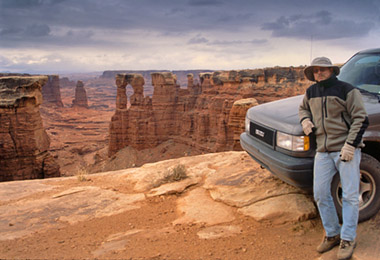 Born in Poland, I studied at the University of Wroclaw and came to United States after receiving my master's degree in geography. When still at school, I worked as a journalist for a TV station (TVP2 in Wroclaw). In Houston I worked for several years as a geophysical analyst and in the meantime, got a Master's in Business Administration from Rice University. However, my early interest in journalism and photography soon resulted in a growing involvement in these areas.

My photographs and travel essays have been published in newspapers, magazines and books, both in the United States and Europe, including numerous Lonely Planet guidebooks, a long series of articles in The Houston Chronicle, reports in the leading Polish language newspapers Gazeta Wyborcza, and New York's Nowy Dziennik. My work can often be seen on Internet, including travel sections of major newspapers such as The New York Times.

I spend up to six months a year traveling, thoroughly researching all destinations and pre-visualizing many of the photographs, often well in advance. I revisit many locations searching for the perfect time of year, weather and light.

I am represented by agencies in the United States, United Kingdom, and Poland. To see a wide selection of images, please visit Alamy and Getty Images. Many photographs can be purchased as individual prints, made to order. I am available for assignments.